Education - iPads in the classroom

First steps with your iPad 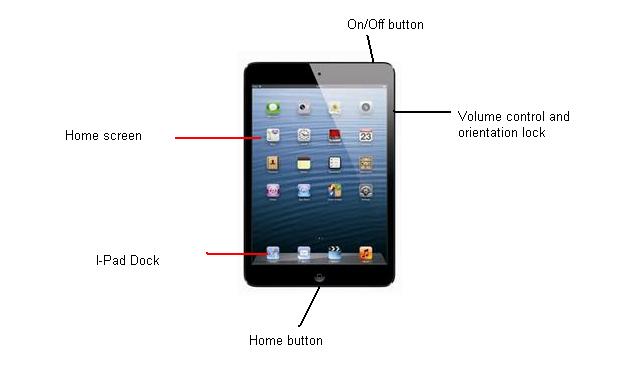 Initial screen in iPad. Displays all apps that come with the device.

iPad Home Screen Dock – Docks four apps that come with the iPad and are considered to be critical to user. Shows Safari, Mail, Photos and Music. Stays static in the display regardless of whether you are on the home screen or another screen.

Home Button – when pressed once, it will bring you to the Home screen. When pressed twice, it will show you the apps that are open on your iPad.

Volume control  - controls sound levels. If held down in the soften (-ve) it will quickly mute all sound.

Orientation Lock/Mute - When on, will hold your iPad screen orientation in whichever mode you prefer (Portrait or landscape). Will also turn the sound off. Preference for orientation or mute is identified in your Settings screen.

On/off button – Pressed once it will turn your iPad screen off or on (it will still be in ‘On” mode. This just saves some power.)  Pressed and held, the iPad will completely shut off. To turn on, hold it down until the Apple symbol appears.

Adding apps to your iPad dock

When you first open your iPad, the dock holds Safari, Mail (set to your own preference), Photos and Music. You can have up to 6 items in your dock and they do not all have to be the original installation.

If you move one of the given apps out, it will rest on your home screen and cannot be moved to any other screen.

To move an app into the dock, hold your finger down on any app. The apps start to wiggle and added apps will have an X in the left hand corner. Pick up the app with your finger and move it to the dock.

Organizing your apps by theme or use helps ensure that you are not scrolling through pages of apps to find the one you want. To organize the apps into useful folders, hold down on the app until it starts to ‘wiggle’ and the X is shown. Move the app on top of another one that you want to place in the same folder. The apps will line up side by side in an opened “file” with a pre-selected name for the folder. The name can be changed to more accurately reflect the uses, if desired.

User manuals and tips and tricks

Examples of Effective Use of iPads in a Classroom